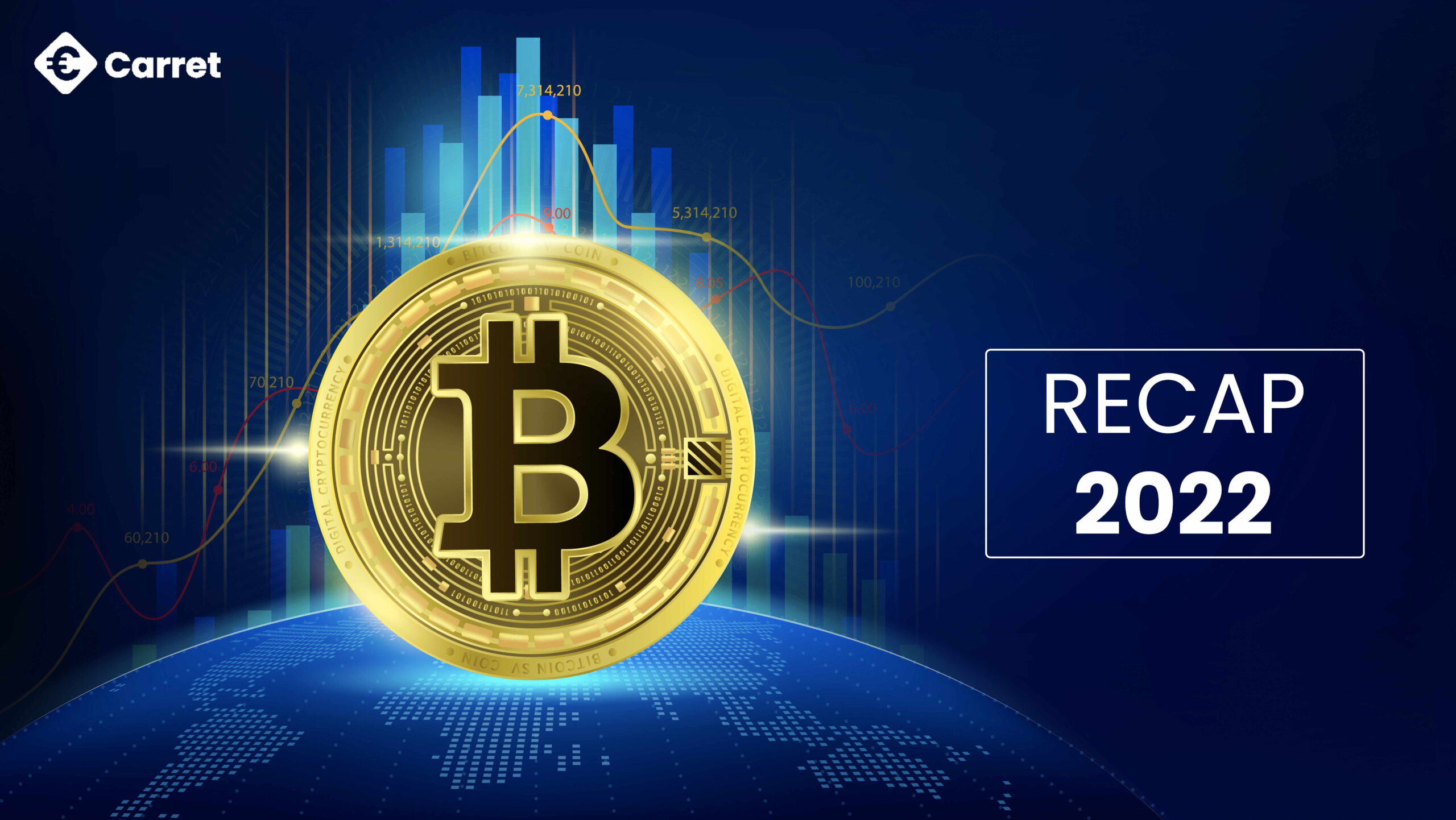 Some consider 2022 to be the worst year in the history of cryptocurrencies, but it is merely another part of the cyclical pattern that defines this revolutionary technology. The euphoria and chaos that propelled the cryptocurrency industry to new heights in 2020 and 2021 crashed with a vengeance this year. There appeared to be no shortage of high-profile bankruptcies and scandals that shook the crypto sphere in 2022.

In 2022, cryptocurrencies encountered numerous obstacles, ranging from the collapse of the Terra ecosystem to the failure of the FTX exchange. Nevertheless, the industry remained resilient and advanced. Some events restored confidence in the blockchain industry, such as the ETH Merge, crypto war donations, and the integration of crypto payment systems.

Now, Let’s look at a few events that happened in 2022 that sent shockwaves through the crypto sector.

NFTs reached a trading volume peak of $17 billion in January, driven by OpenSea’s astronomical valuation and Bored Ape Yacht Club. Since January, the market has decreased by more than 95% and is now near $44 million.

There are approximately 360,000 active OpenSea users who own NFTs, but only 9% of them own 80% of the total NFT value. The NFT craze has subsided, and many users are at a significant disadvantage, but the potential applications of NFTs may usher in a new era of innovation in the future.

This year in February, the Russia-Ukraine conflict and subsequent energy crisis have taken a toll on the global economy, including crypto. At the onset of the invasion that halted Ukraine’s economy, crypto donations from around the world poured into the country.

The Ukrainian government announced its acceptance of cryptocurrency transactions. Alongside the tweet were two wallet addresses requesting Bitcoin and Ethereum donations. Over $69 million were donated to Ukraine and non-governmental organizations using cryptocurrencies.

Crypto regulations have long impeded the industry’s widespread adoption. Citizens and businesses would be reluctant to explore crypto’s potential unless governments and regulators take the initiative to understand it and bring it under the law. Under the leadership of President Joe Biden, the US government took a significant step in March 2022 to regulate cryptocurrencies and bring more clarity to the industry.

The Central African Republic adopted bitcoin as legal tender, the President’s office announced on April 27th, joining El Salvador as the second nation in the world to do so. This marked the beginning of a trend of countries adopting cryptocurrencies legally.

“This move places the Central African Republic on the map of the world’s boldest and most visionary countries and it is the first country in Africa to adopt bitcoin as legal tender”, Obed Namsio said.

In May, the implosion of the token LUNA wiped out $40 billion worth of investors’ funds within a week, making the collapse of the Terra ecosystem the major topic of conversation during the second quarter of the year.

Three Arrows Capital, a cryptocurrency hedge fund, declared bankruptcy and owed over $3.5 billion to creditors, including Voyager (3.5 million users) and BlockFi (1 million users), both of which have also collapsed in a domino effect.

BlackRock announced in August 2022 that it had formed a partnership with Coinbase Global. The partnership is limited to bitcoin and will grant institutional clients access to trading, custody, prime brokerage, and reporting via Coinbase Prime. Using BlackRock’s Aladdin software suite, clients can also manage their bitcoin holdings and conduct a risk analysis.

The 15 September “Merge” of Ethereum emerged as one of the most significant events of 2022. Completing the Merge, the largest smart contract blockchain transitioned from the Proof-of-Work (PoW) to Proof-of-Stake (PoS).

The Merge advances Ethereum’s goal of increasing security and scalability by one step.

The FTX bankruptcy was the worst tragedy to befall the crypto industry this year. As one of the world’s largest crypto exchanges collapsed, so too did the market for cryptocurrencies.

Early in November, a report revealed that Almeda Research, the sister company of Bankman-FTX, Fried’s was in a precarious financial position. Moreover, the majority of the company’s holdings are FTT. The market was set off by the lack of transparency and poor management of the FTX ecosystem, and the rest is history.

FTX halted withdrawals on November 8 and declared bankruptcy on November 12. On the same date, bankman-Fried resigned from his position as CEO of FTX. A few weeks later, Sam Bankman-Fried was arrested in the Bahamas.

Another Crypto world update we had in Nov 2022 was the Release of proof-of-reserves audits.

In response to the FTX collapse, which happened because the now-defunct cryptocurrency exchange used user funds to reduce its own risks, crypto exchanges came up with a solution called “proof-of-reserves” to improve transparency.

A practice that was recently backed by the CEO of Binance, Changpeng Zhao, gives exchanges a way to show transparency to users when there aren’t clear rules.

To ensure that custodians are financially stable, a proof-of-reserves (PoR) audit verifies that the company’s on-chain holdings are the same as the client assets listed on the balance sheet. This shows customers that the business is solvent and liquid enough to keep doing business with them.

The decentralised exchange (DEX) Uniswap announced that users can now trade non-fungible tokens (NFTs) on its native protocol. According to Uniswap, the function will start out with NFT collections for sale on sites like OpenSea, X2Y2, LooksRare, Sudoswap, Larva Labs, X2Y2, Foundation, NFT20, and NFTX:

When using Uniswap NFT, which combines ERC-20 and NFT swapping into a single swap router, developers say that users can save up to 15% on gas costs compared to other NFT aggregators.

Even though the digital asset industry has been hit by a bear market this year, the number of cryptocurrency ATMs has continued to grow. In fact, as of December 30, there were 38,597 crypto ATMs worldwide. This is an increase of about 4,239 machines from January 2022, when there were only 34,358.

Apple Pay And Google Pay can be used in Purchasing Crypto:

A recent update to Binance Build means that Apple Pay and Google Pay can now be used to buy cryptocurrency. The statement showed that customers can buy cryptocurrencies from the exchange using these well-known payment methods. This move is a big step toward making the service easier to use and toward making bitcoin investment more popular.

Twitter, an American microblogging and social networking service, is reportedly working with Stripe, an online payment company, to let merchants accept cryptocurrency payments from their customers.

For now, Stripe will only take payments in USD Coin (USDC), a stablecoin tied to the US dollar. Twitter will be the first business to use Stripe’s new payment method, which lets some users get paid in USDC.

Given that Twitter’s focus on creators has mostly been on giving creators ways to make money from services that Twitter already offers to all of its users, adding crypto payments is an interesting move.

Visa, a global payments company, showed a stronger and more long-term interest in cryptocurrency on Monday by putting out a paper about how it plans to work with the Ethereum network to make automatic payments. Visa is working with Ethereum to help the cryptocurrency market reach the next level.

It will be intriguing to see what innovations and breakthroughs the crypto universe has in store for 2023.